Farewell to Bezrukov, or why should the Russian series be banned 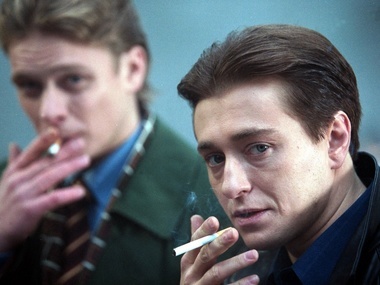 The Russian actor Segiey Bezrukov in the movie "Brigada"

The journalist Evgeny Kuzmenko reflects in his material for the GORDON whether TV viewers need Russian-made TV series that are broadcast on Ukrainian TV channels almost round the clock and how to get rid of Putin’s propaganda from TV screens.

Well, what are we going to do, my friends: shall we forbid Putin’s "soap" on our TV? Or let it bubble from early morning to the dead of night?

As for me, I have a democratic conflict of interests in my head. Nothing to worry about, I will not turn to a psychiatrist, I just have to think a little.

Voices rustle and worry. Slavophiles ask melancholically, "How is it – switch off? And how about the spiritual brotherhood of people? Our common past? Our damned spiritual ties?"

Pragmatists come to help Slavophiles, "Are you crazy? And what do we have instead of Russian series? We do not have ours! And buying from Americans is too pricey! Too expensive..."

Serious arguments, I have to say. After all, we cannot hide the truth: sometimes when you watch "Only old men go to war" or "Electronic" – something nostalgic moves in the soul. Indeed, we lived together in one country – yes, it was ugly and crazy all over – but we did live somehow.

And it is sad to think about “content” and “merchandising”: we do not had enough money for the whole channel of "House of Cards" with "True Detective", we will run out of finance – and what then? Watch "Roksolana" and the sad Polish-Ukrainian "Aquarium"?

– "Leave Russian channels?” this brute and chastener whispers. "You are beyond yourself, come round! These series are made by the enemy who intruded in the country where you live. It kills the best people of your country, and you are going to go on watching this "soap"? Does not it occur to you that this rubbish makes the majority of Donbass population who have never traveled anywhere believe that the Chechen war is just, KGB is noble, and most of Russians live in serial mansions and have three cars? Do you understand that year after year, gradually, Putin’s "Russian world" wadded the brains of housewives and their husbands? And who of the people killed at this war granted you the right to stand up for Huilo's TV channels on our TV?!!

Here is what my Banderite is like. It has a ready tongue. An you know, the more I reflect the more I admit to his words. No, I am not inclined to trust blindly – I only saw much over these years of travelling across the cities and villages of my huge homeland. And along the roads and country roads connecting them.

It was not for the sake of a witty remark that I mentioned roads. I remember two Russian TV on my way in a minibus from Kiev to Sumy, "Love Consolation" and some criminal crap. "Ukrainians – they are like that, you cannot trust them," a rascal was teaching the hero on the screen. My neighbour, a stout woman with bags nodded in agreement: you cannot, indeed, you cannot!

I remember children in the yard at my friend’s; not older than 10 years old, with protruding eyes and fingers crooked in anger – and an evil cry:

– Hey you bitch, why you shivering, wanna a stab, you bastard?

I also remember Oleg Tabakov playing a Ukrainian profascist head in some military or spy series. I remember Petliura and Skoropadsky in the series "Death of the Empire" – mean bastards against noble experts, officers of the German and Russian counterintelligence service.

I have not bought TV program for a long time, I watch TV occasionally (mainly soccer, tennis and biathlon) – but even now I can give dozens examples of how Putin’s TV, creeping in all holes, spoils consciousness of millions of people who do not have enough wisdom to understand what is going on.

And what is going on is as follows: Putin's Russia is seriously ill with one of the most terrible recurrence of rage that this country suffers from periodically. There is a great variety of symptoms: persecutions of dissidents, contemptuous attitude to smaller neighbors, readiness to shed blood – their own and others' and a loud chant at the football matches: "** the Caucasus, ** it!"...

And this rage creeps into all holes, infecting neighbors, turning them into embittered Empire supporters who cannot tell the difference between the state for the person, and the person for the state; what is Sweden and what is Biryulevo; what are human rights and what is "gays have gone crazy"...

I do not want my country where most of the citizens dream of Europe to be defenseless before this information rage.

No, I am not inclined to see everything in black color. And I will find where to watch the new movie by Zvyagintsev and to read the new book by Ulitskaya. And my friends will. We do not live in Northern Korea – we will find, we will dig ше out.

But we cannot do without quarantine. Also you should not say that no ban has ever done good. You know yourself that there are many exceptions to this rule. If the poison continues to enter an organism, do whatever – no treatment will help, the organism will suffer. It is too late to say on the grave that the deceased was a very sensitive and worthy person.

Or I am really wrong and have sold myself to scabby Jews or stinky Yankees?