146 Found Dead And Already Exhumed At The Mass Grave Site In Izyum, Including Two Children – Head Of The Military Administration Sinegubov 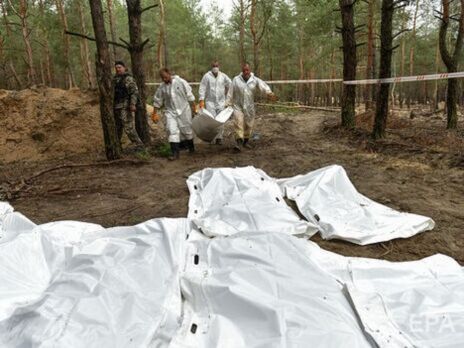 After the de-occupation of Izyum, a mass grave of people was discovered there
Photo by EPA

In the recently de-occupied Izyum, Kharkiv region, 146 bodies have already been exhumed, found in a mass grave site. This was announced on Telegram on September 19 by the head of the regional military administration, Oleg Sinegubov.

"146 bodies were exhumed, the vast majority of which are civilians, including two children. Some of the dead have signs of violent death, there are bodies with their hands tied and signs of torture. The deceased were also found to have mine-explosive injuries, shrapnel and stab wounds," he wrote.

Sinegubov noted that the bodies of all the dead are sent for examination to determine the exact cause of death.

"The whole world should know about the terrible crimes of the Russian invaders in the Kharkiv region. And the collected evidence will certainly be used in international courts to punish war criminals!" – wrote the head of the regional military administration.

After the de-occupation of Izyum in early September, a mass grave of people was discovered. According to the police, there are about 455 graves there. The exact number of bodies in the graves is still unknown, as the exhumation is still ongoing, President of Ukraine Volodymyr Zelensky said.

Among the bodies of civilians that were exhumed on September 16, there are several bodies with their hands tied behind their backs, and one person was buried with a rope around his neck, Oleg Sinegubov, head of the Kharkiv OVA, said. A burial place of servicemen was also found: 17 people, some of them have signs of torture, Zelensky said.

On September 16, the President of Ukraine once again called on the world community to recognize the Russian Federation as a country sponsoring terrorism. "You've seen Bucha, Mariupol, now Izyum. How long can this go on? How many more places like this must Russian terrorists create before the world stops them?" - he said.

Mass graves in Izyum are confirmation that Russia is a terrorist country, the Latvian Foreign Ministry said. The United States, like the European Union, condemned the atrocities of the Russians in Izyum, but they did not speak about the recognition of terrorism by the Russian Federation.

Oleksandr Svishchov: Collaboration with Andre Tan is our way to draw public attention to water polo and raise money to help children affected by the war
8 september, 2022 15.18 |comments:

Hryhoriy Kozlovskyy: On this stove, our guys could boil some water and make some hot meals
6 september, 2022 09.50 |comments: