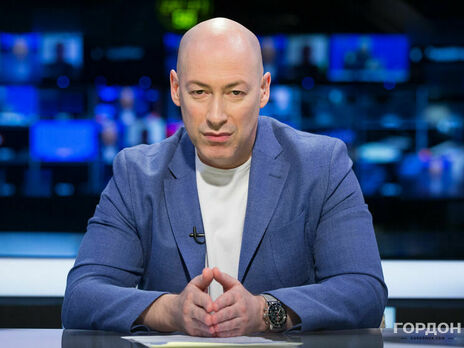 Gordon: I want international community to know that under President Zelensky’s rule methodical assault against the freedom of speech is taking place.
Photo: Rostyslav Gordon / Gordonua.com

Dmytro Gordon, founder of web-based media GORDON, addressed law enforcement authorities of Ukraine and Embassies of the Western countries in relation to possible secret investigative activities he might be subject of. Gordon announced it on December 15 in a YouTube video.

Journalist reminded that earlier this week he made 3 hours interview with former Head of the Office of the President of Ukraine Andrii Bohdan. Among other things, Bohdan told that President Volodymyr Zelensky personally makes orders on criminal prosecution of certain persons. Journalist’s name was mentioned in the list.

“Andrii Bohdan said that Volodymyr Zelensky ordered to put Dmytro Gordon in jail. And more than that, under Poltava court decision secret investigative activities are conducted on me. What does it mean? It means someone listens my phones, follows me, makes audio and video recordings. It means my private life is unlawfully watched, listened and discussed by people who have no right to do such things”, – Gordon said.

He noted that as a journalist and as a citizen, he comments on current events in the country and pays attention to problems.

“I clearly realize that President Zelensky unfortunately, most regrettably, is impervious to criticism. I realize that he does not like when I or someone else say things that he does not want to hear. But I cannot abide an outside observer position. If Secretary of State Antony Blinken formally declares in Vilnius that annually $40 billion are stolen from state budget in Ukraine, how can I remain silent? How can I remain silent about other blatant cases that undermine Ukrainian statehood? Naturally, I speak out, and as result, it occurs that they steal, but Gordon is to blame. President Zelensky fills his entourage with idiots and traitors, I discuss it, and I get blamed. Zelensky and his friends undermine foundations of our state – and I am blamed again. I am not guilty in it! President and his close circle are guilty. And I say it aloud. If for pronouncing the truth President decided to put me in jail and sanctioned secret investigative activities on me, I am sorry, I consider it illegal and immoral”, – declared journalist.

He reported that he sent requests to Prosecutor General’s Office, Security Service of Ukraine, National police and State Bureau of Investigations

“Right now I am signing and sending requests to Prosecutor General’s Office, Security Service of Ukraine, National police and State Bureau of Investigations. I demand to answer if there are any investigative actions on me in progress now. If there are, what is their legal basis, and so on. I expect to receive answers for my questions within five days according to the law. I will inform public on the matter. In addition, I am sending requests to the Embassies of the USA, Great Britain and the EU countries. I want international community to know that under President Zelensky’s rule methodical assault against the freedom of speech is taking place,” – announced Gordon.

In requests to the law enforcement authorities that are available to GORDON edition, the journalist asked for the answer to the following questions:

On December 14 in Holovanov’s Hour on Ukraine 24 TV Gordon expressed an opinion that in this manner the authorities were attempting to influence what he says.

“I will not be intimidated by them. I have good linchpin and all the rest is fine. As I did before I will continue to tell truth to the people. I work for the people and do not ask anything in return. I honestly earn my money. They have already snooped everywhere they could. People inform me at once,” – Gordon declared.

According to the journalist, data on him had been collected in State Tax Service, and “there is no fault to find there”. His real estate business had also been scrutinized.

“I received a call from a man who was head of HOA in a building where I own apartments. The building was commissioned with a delay, and additional payment was due. HOA sued all the owners for additional payment. It is standard procedure. Someone called him asked, “Did you sue Gordon? What is the situation?” He replied, “We sued everybody. Gordon fully paid and we immediately dropped the sue.” It looks so silly! They are trying to catch me on something. Guys, do whatever you want – you are not going to find anything on me. Because there is nothing. And I, I will keep telling truth. May be the truth that is uncomfortable for you. But this is your fault,” – emphasized Gordon.

He noted that he would change his rhetoric if the authorities would alter their actions.

In late November 2021, on the air of Ukraine 24 TV channel, Gordon reported that he had disappointed in President Zelensky. He reminded that in 2019 he strongly opposed reelection of Poroshenko and publicly called to vote for Zelensky in hope that Zelensky would swiftly perform needed reforms. But after two and a half years under Zelensky administration in journalist’s opinion in Ukraine “no significant reform is implemented, fight against corruption didn’t even start, we observe even greater concentration of power around the Office of the President and pressure on the freedom of speech”.

After that, Zelensky told the press that Gordon “is jumping out of his pants” in his dislike for Zelensky’s second term in office.

In response, Gordon reminded that it was Zelensky who promised to lead the country for one term only, and now he must keep his word. In addition, Gordon accused the Office of the President of running information campaign against him personally.