"At least that way I can get my revenge." Businessman Kozlovskyy's wife throws stones at cars with Russian flags in Cyprus 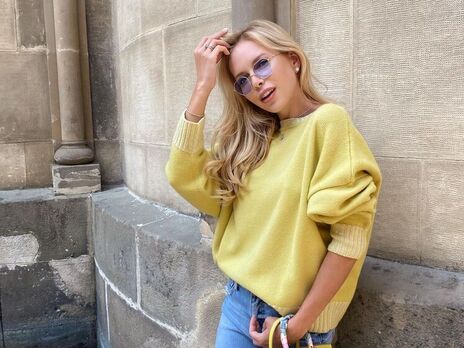 Dumanska: Instinctively, I start picking up stones and throwing them myself. And I get so much pleasure out of it
Photo: julia_dumanska / Instagram

Ukrainian singer Julia Dumanska, who left for France with her children after the war and then moved to Cyprus, threw stones at participants of a Russian motor rally. She said this in an interview with Radio Lux FM on 18 July.

"Everything is OK in Cyprus, but the only big disadvantage of Cyprus is that it is loyal to the muscovites. And there are plenty of them at every turn," – she said.

According to Dumanska, once a convoy of cars with Russian flags in support of the Russian Federation drove past the house they were renting.

"We were taking a walk in the yard, I hear cars honking. And I'm used to the fact that if cars honk, it's a wedding. Suddenly a boy runs up and says: "There's a column with Russian flags". His mum jumped up and ran over there. I am curious too. I run after her", – the singer said.

Dumanska admitted that after the stranger started throwing stones from the flowerbed at the cars with Russian flags, she herself followed her lead.

"Instinctively I start picking up stones and throwing them myself. And I get so much pleasure out of it, – the singer confessed. – The traffic light really worked to my advantage. It was red at the traffic light. They were standing there, flags flying, honking. And I hit one car directly, another one. They start opening their windows, making gestures. And it makes me even more excited."

Dumanska noted that the rally participants were afraid to get out of their cars.

"I had such an elevated mood that at least this way I could get my revenge. If someone had came out, I wouldn't have been responsible for myself. I probably would have thrown it at him, too", – the performer confessed.

Dumanska is married to Ukrainian businessman Hryhoriy Kozlovskyy. The couple have a daughter and a son. Kozlovskiy has three children from a previous relationship.

The singer became famous after the premiere of the song "You can't walk into the same river twice".

Kozlovskyy, despite being a father of many children, decided to stay in the country following Russia's full-scale invasion of Ukraine.

He said that in such a difficult time everyone should help as much as they can. "Some can't and are not able to fight, but are able to earn money and help the army well. Everyone has his own fight: someone pays taxes, someone goes to work. There are different kinds of help. We are like the ants – each of us must bring his share for this victory", – Kozlovskyy explained his decision. Commenting on the departure of conscripted men from the country, the businessman stressed that it was their choice which is left to their own conscience.