"Breaking Into People's Homes And Taking Away The Food." The Head Of The Sumy Regional State Administration About The Behavior Of The Invaders 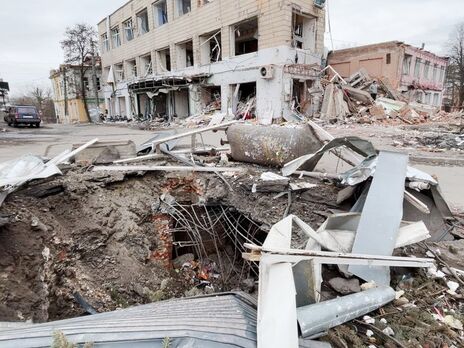 Akhtyrka is bombed every day
Photo by suspilne.media

Taking advantage of the absence of humanitarian corridors, the Russian invaders are attacking civilian houses in the Sumy region. This was announced on 16th of March on Telegram by Dmitry Zhivitsky, the head of the Sumy Regional State Administration.

"They crawled out of the holes like rats. The villages where the enemy comes to spend the night suffer the most from the hands of the Nazis: Russian orcs break into civilian houses, kick people out on the streets and take away their food! They slaughter the cattle and poultry. Damned monsters loot and act worse than the Nazis," wrote Zhivitsky.

According to him, on March 16th, Ukrainian military defeated the artillery positions of the invaders in the Akhtyrsky district, destroyed several self-propelled artillery and anti-aircraft missile systems called Buk, as well as a Russian ammunition depot in Boroml.

The head of the Regional State Administration added that for several hours in a row the battle continued in another direction - Bolshaya Pisarevka.

"Every orc should understand: he came to the Sumy region to die. When a Russian fascist sets his foot on our land he will die like an animal. This is our revenge for every drop of blood, every suffering of our people. Russian enemy-you will burn in hell!" Zhivitsky wrote.

Photos of the destroyed Akhtyrka in the Sumy region were published by the Obshestvennoe. It is reported that almost all of the infrastructure in the city has been destroyed, there is no central heating, there are problems with water and gas supply.