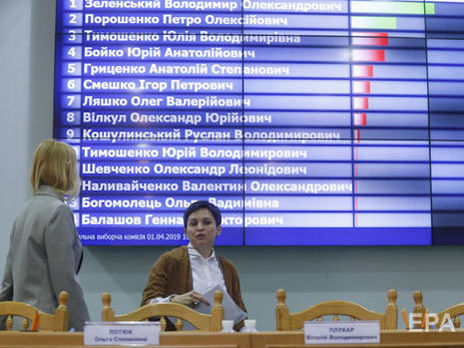 On March 31, 2019 the first round of the presidential election was held in Ukraine
Photo: ЕРА

According to the report from Central Election Commission (CEC) after all electronic electoral protocols has been processed showman Volodymyr Zelensky has 30.24% of votes, incumbent President Petro Poroshenko has 15.95%. Batkivshchyna party leader Yulia Tymoshenko received 13.4% of votes.

As of the morning of April 4 Central Election Commission processed 100% of electronic electoral protocols for presidential election in Ukraine, declared CEC on its website.

In the fourth place, there is Yuriy Boyko, out-of-fraction Member of Parliament, founder of "Opposition platform — For Life". He has 11.67%. The fifth is Anatoliy Hrytsenko, former Minister of Defence, Civil Position party leader, with 6.91%. Ihor Smeshko holds the sixth result with 6.04%. He is former Head of the Chief Directorate of Intelligence of the Ministry of Defence and former Head of the Security Service of Ukraine.

After that voting results reads as following.

The rest of candidates received less than 1% of votes. 1.18% of ballots were declared invalid.

Zelensky won in 19 regions and in Kyiv, CEC imformed. In two regions, Lviv Oblast and Ternopil Oblast, Poroshenko took the lead. Two regions, Donetsk Oblast and Luhansk Oblast were won by Boyko, and one, Ivano-Frankivsk Oblast, — by Tymoshenko.

Official results of first round of presidential election in Ukraine in 2019 are scheduled to be announced before April 10.

On March 31, 2019 the first round of the presidential election was held in Ukraine. There were a total of 39 candidates for the election on the ballot. Turnout according to CEC was 62.8%.

The second round voting will be held on April 21.