"It all happened very fast". The sole survivor in An-26 crash near Kharkiv told Zelensky about the tragedy 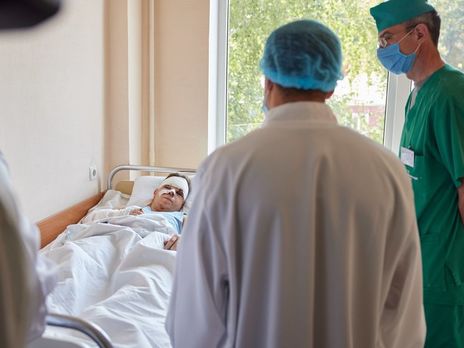 Military cargo airplane An-26 crashed on September 25 not far from Chuguev in Kharkiv region. Only one person survived, Viacheslav Zolochevsky, 20, military cadet. On September 26 President Volodymyr Zelensky visited him in hospital.

The injured cadet receives medical care in the Military Medical Clinical Centre of the North region. His condition is moderate according to Eduard Khoroshun, the Head of the Centre.

“Viacheslav told Volodymyr Zelensky that all happened very fast and it was not clear what was going on. In his words, the cadets and the crew knew each other and had flown together before.” – reads the report.

President wished Viacheslav the speediest recovery, had a conversation with his mother Iryna, and assured her that the family will receive every assistance they would need.

Armed Forces of Ukraine’s An-26 airplane fell and caught fire 2 km from military airfield Chuguev at around 21-00 on September 25. There were 27 people on the plane: seven military men and 20 cadets of Ivan Kozhedub Kharkiv National Air force University.

Two cadets managed to jump off the plane immediately before the fall. One of them has been severely injured and died in hospital on September 26. The life of the second survivor is not in danger.

Presently the bodies of those who had died have not been identified and DNA analysis should be employed for it.

September 26 was declared an official day of mourning in Ukraine.