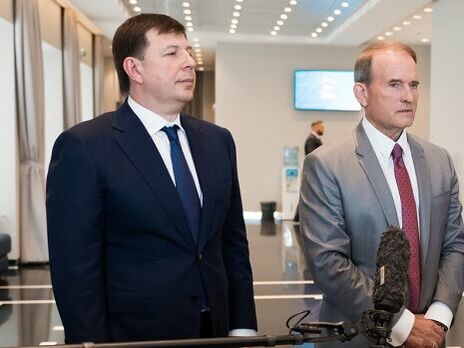 Earlier, sanctions against Kozak and Medvedchuk were implied
Photo: zagittya.com.ua

Members of Parliament from Opposition Platform — For Life Viktor Medvedchuk and Taras Kozak were informed that they are suspected of high treason. It was announced by Iryna Venediktova in her Facebook.

“I inform the society that today I signed the reports of suspicion for two people’s deputies of Ukrainian Parliament – M. and K. Together with fellow law enforcement officials, we had conducted many investigation activities, had gotten many expert opinions, and during the pre-trial investigation had interrogated high value witnesses. It was an effective work; we did all we could to keep information in vacuum,” – reads the statement.

The mentioned deputies are not only suspected of treason but also of attempts to steal national resources in Ukrainian Crimea.

“After searches have been made the whereabouts of people’s deputy M. remains unknown. That is why SBU takes certain measures to find him and serve him application for pre-trial detention,” – remarked the prosecutor.

Venediktova didn’t specify names but Interfax-Ukraine reported that persons in question were Kozak and Medvedchuk.

On May 11 media reported that SBU conducts a search in Medvedchuk’s house in Kyiv.

On February 2, Volodymyr Zelensky, President of Ukraine, implemented NSDC’s decision on sanctions against Kozak and TV companies he owned – 112 Ukraine, ZIK and NewsOne. Providers began to block these TV stations.

On February 19 2021 the National Security and Defense Council of Ukraine voted for sanctions against 19 legal entities and eight individuals: five Russian citizens (according to some media those were the managers of Medvedchuk’s family assets) and three Ukrainians – Medvedchuk, his wife Oksana Marchenko and Natalia Lavrenyuk, who media called Kozak’s wife.

The sanctions were applied based on SBU investigation of financing terrorism.