One of NEXTA founders, Protasevich, was on the board of the plane that made an emergency landing in Minsk. He was detained 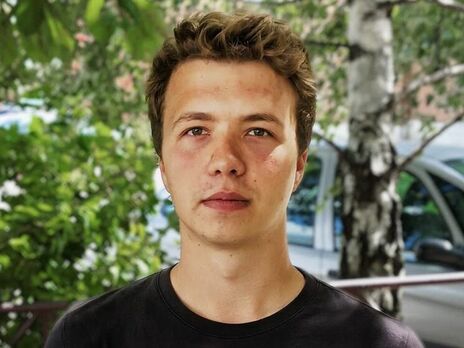 The plane was heading to Vilnius, and today it was forced to land in Minsk
Photo: Светлана Тихановская / Telegram

On the board of the Ryanair airplane that was flying from Athens to Vilnius there was Belarus opposition activist, one of NEXTA Telegram channel’s founders, Roman Protasevich. On the pretext of information about a bomb on board the plane was forcefully landed in Minsk.

Protasevich was detained by Belarus authorities, reported “Belarus of the brain” Telegram channel. Protasevich is editor-in-chief of the channel.

“The Pool of the First one” Telegram channel that is known to report activities of Aleksandr Lukashenko who considers himself the President of Belarus wrote that Lukashenko personally ordered MiG-29 jet fighter aircraft up in the sky to force the landing. And now the jet fighter waits for the procedural check-ups to be over to escort the civil airplane to the border with Lithuania.

Lukashenko, allegedly after the crew’s request, ordered “to turn the plane back and to receive it” when it already was near the border, specified “The Pool of the First one”.

“Belarus of the brain” writes that in Athens Protasevich noticed “unhealthy attention from a fit Russian-speaking middle-aged man.” “The man tried to take a photo of Roman’s documents, then turned around and left albeit he was next in line for documents control”, - remarks the channel.

Lithuanian readers told Delfi that before the landing in Minsk a conflict occurred with an unnamed passenger. There was no additional information on his identity. Lithuanian Ministry for Foreign Affairs press-person failed to provide the media with an official reason for the emergency landing.

NEXTA is the most famous Belarus opposition source that gained mass popularity at the wake of protests against the results of the 2020 Presidential election. The channel was founded by Stepan Putilo. The office of the channel is situated in Poland. NEXTA has two main Telegram channels: NEXTA Live with 1.2 mln subscribers, and NEXTA with 588 thousand subscribers. There is also a satirical channel LUXTA with 138 thousand people signed on it.

NЕХТА and NЕХТА Live have been declared the extremist organizations in Belarus.

On November 16, 2020, the Ministry for Foreign Affairs of Belarus served a note to Chargé d'affaires a.i. Poland in Minsk Martin Voitsekhowski demanding extradition of NEXTA founders Stepan Putilo and Roman Protasevich “considering particular public danger of their criminal activities”. Putilo was a wanted man in Belarus since August 2020.

Since August 9 mass protest actions have continued in Belarus of people who disagree with the official result of the Presidential election. According to official data, Lukashenko won with 80.1% of votes (he has held the office since 1994). Svetlana Tikhanovskaya, Belarus opposition leader, took second place with 10.1%. Alternative exit polls have shown an opposite picture — confident victory of Tikhanovskaya.

On September 23, Lukashenko held a secret inauguration. For the first time in the history of Belarus the ceremony was not announced and it was not broadcasted on TV. A number of states did not recognize the inauguration of Lukashenko, including the USA, Great Britain, Canada, Germany, Latvia, Lithuania, Norway, Poland, Denmark, Ukraine and the Czhech Republic.

As of May 21, 406 citizens of Belarus were recognized as political prisoners according to “Vesna” Human Rights Centre. The majority of them were prosecuted on criminal charges after the Presidential election.