Reznikov: My task is to prepare the country for NATO membership 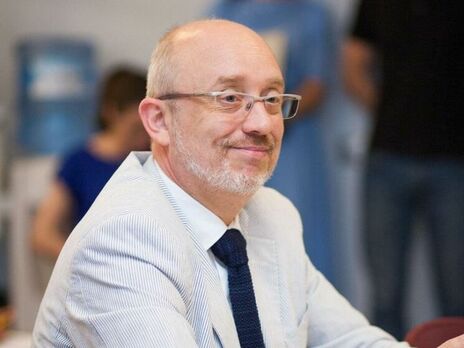 Reznikov about the new position: My karma as a lawyer - I will just serve the Armed Forces of Ukraine
Photo: minre.gov.ua

Olexiy Reznikov, who became the Minister of Defense of Ukraine on November 4th, said on November 5 on a broadcast of Savik Shuster's Freedom of Speech program on Ukraine channel that the proposal to replace the position of deputy prime minister to the chair of the Defense Ministry was received from Ukrainian President Volodymyr Zelensky.

"Sympathy or congratulations?" -- he said in response to the presenter's congratulations on his new position. Then the journalist asked why Reznikov would need such a change.

"It was a proposal and instruction from the President of Ukraine. Because I decided for myself to stay in public service for now and not to sit on the couch and tell you how you can do something better. I think if you can do better -- go and do it. So this is a new phase in my life for now. Important, complicated. I am worried," said the head of the Defense Ministry.

He says that now "the Commander-in-Chief's idea is that we have to communicate with the world, to develop military diplomacy together with civil one."

"Because the political decision about [Ukraine's] joining NATO, for example, as an alliance - it will be made at some point. But we need to prepare for that. We need to fill the framework agreement with the United States, deal with corruption in the Armed Forces in terms of purchases, I mean the Ministry of Defense. We need to equalize salaries so that it's an understandable system. And when you start to understand that, you realize that's basically a task for a lawyer, too, for a negotiator. So I think my skills today, my experience, the president has decided to use it in this direction," the minister added.

Reznikov stressed that he will work on integration into NATO "definitely, because it is foreseen in the Constitution."

"Our movement is towards NATO - no other option is discussed. That is why I have the task to prepare the country among other things. Since today the Armed Forces protect you and me, our sovereignty, independence, they also need to be protected -- on the political, diplomatic front, on the legal one. Therefore, in fact, my karma of a lawyer -- I will just serve the Armed Forces of Ukraine", -- added the head of the Ministry of Defense.

Ukraine intensified its cooperation with NATO in 2014 against the background of Russia's occupation of Crimea and the armed conflict in Donbass. At the end of 2014, the Verkhovna Rada passed a law that provided for Ukraine's rejection of the "non-aligned" policy. According to Ukraine's Military Doctrine, adopted in 2015, deepening cooperation with NATO is a priority.

On February 7, 2019, the Ukrainian parliament passed a law making a provision in the constitution on the strategic course of the state to acquire full membership of Ukraine in the European Union and the North Atlantic Treaty Organization. The law came into force on February 21.

In 2018, NATO recognized Ukraine's status as a candidate country for membership in the Alliance; in 2020, Ukraine received the status of partner of expanded opportunities.

On June 14, 2021, a NATO summit was held in Brussels, the final communiqué of which noted that the Alliance supported Ukraine's membership in NATO.

U.S. President Joe Biden said that Russian aggression would not be an obstacle for Ukraine's accession to NATO. At the same time, answering the question whether Ukraine would receive an action plan for NATO membership, he said that "it remains to be seen" and that Ukraine must first get rid of corruption.

Ukrainian Foreign Minister Dmytro Kuleba said in July that Ukraine wants specific information from NATO about the prospects of joining the Alliance. "If Russia is the reason, don't tell us it's because of a lack of reforms," the minister stressed.

According to Kremlin spokesman Dmitry Peskov, Ukraine's accession to the Alliance would force Russia to take "active measures." In response, Kuleba said that Kyiv was not interested in Russia's opinion on Ukraine joining NATO.

On October 20, during his visit to Kyiv, Pentagon chief Lloyd Austin noted that "no third country" had the right to veto Ukraine's accession to NATO. In response, Russian President Vladimir Putin said that the U.S. defense minister was "opening the door of NATO" to Ukraine.

NATO Secretary General Jens Stoltenberg said that Russia should not be afraid of Ukraine joining NATO because it is a defensive alliance.

On November 3, parliament dismissed Ukrainian Defense Minister Andrei Taran, who had headed the agency since March 2020.

Reznikov had headed the Ministry for the Reintegration of Ukraine's Temporarily Occupied Territories since March 2020. On November 1, 2021, he wrote his dismissal letter. On November 3, the Rada voted for Reznikov's dismissal, it was supported by 329 MPs.

On 3 November, President Volodymyr Zelensky sent a submission to parliament on Reznikov's appointment as defense minister.

On 4 November, the Rada made Reznikov the defense minister.

Reznikov did not want to head the defense ministry, the head of the Servant of the People parliamentary faction, David Arahamiya, told reporters. He explained that the authorities wanted "a good, experienced manager, respected in the international environment, who can organize all the business processes in the Defense Ministry".