Russian Troops Dropped A Heavy Bomb On The Theater In Mariupol. Were Located A Thousand People – City Council 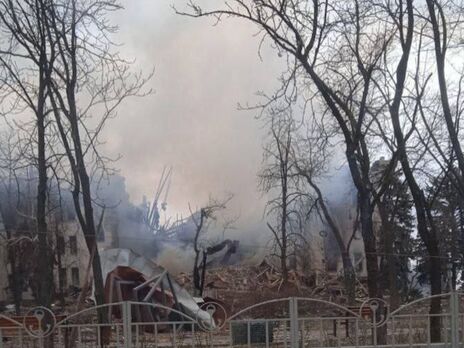 On March 16, Russian occupying forces dropped a heavy bomb on the Mariupol Drama Theatre. Serhiy Taruta, MP from “Batkivshchyna”, wrote about this and reported, citing eyewitnesses, the press service of the Azov regiment, which protects the city.

According to the press service of "Azov", about a thousand civilians of Mariupol were hiding from shelling in the drama theater.

"The Drama Theatre, the cultural center of the city, was identified as a gathering place for refugees who lost their homes and livelihoods. The occupiers could not have been unaware of this, because it was an officially designated place," the authors of the message emphasize.

Violent fighting continues now, Taruta writes. He emphasizes that no one can get to the ruins.

“We don’t know if there are survivors. And the worst thing is that we can’t get them out of the ruins. Many Mariupol residents hid in the theater with small children! The bomb shelter was also bombarded, there are people there too, children!” he wrote.

Later, the information about the bombing of the theater was confirmed by the press service of the Mariupol City Council.

The city council reported that the bomb shelling destroyed the central part of the building, debris blocked the entrance to the bomb shelter.

"It is impossible to find words that could describe the level of cruelty and cynicism with which the Russian invaders destroy the civilian population of the Ukrainian city by the sea. Women, children, the elderly remain in the enemy's sights. These are completely unarmed civilians. It is obvious that the only goal of the Russian army is the genocide of the Ukrainian people. No matter how much time passes, we will never forgive a single victim, not a drop of blood shed because of this insane war. We will never forgive and we will never forget," the City Council stressed.

As Petr Andryushchenko, an adviser to the mayor of Mariupol, writes on Facebook, the consequences of the strike indicate that a 1,000-kilogram air bomb was dropped on the theater. This shelter, he said, was the largest in the city.

"The probability of getting to clear the ruins is low due to the constant shelling and bombing of the city. This is not a crime. This is not genocide. It's just that the world has not yet come up with words that can describe Russia's crimes," he stressed.

On March 17, Taruta wrote about the people in the bomb shelter survived.

"The bomb shelter survived. The rubble began to dismantle, people come out alive!” – he said.