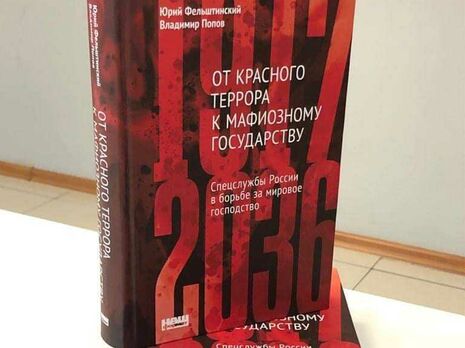 The new book by the American-Russian historian Yuri Felshtinsky was published in Ukraine. The book is co-authored with former KGB Lieutenant Colonel Vladimir Popov and is titled “From the Red Terror to the Mafia State: Russian Special Services in the Struggle for World Domination, 1917-2036”

“I believe that this is the most interesting and important book that I have ever written. It is a fundamental work on the history of State Security seizing power in Russia. I submit that it should made a mandatory high school and university reading item in the new and free Russia”, noted Felshtinsky.

Annotations to the book were written by three well-known Soviet intelligence officers – the former head of foreign intelligence of the First Main Directorate of the KGB Oleg Kalugin, former officer of the Foreign Intelligence Service Yuri Shvets and former GRU operative and writer Viktor Suvorov.

“One wants to scream from excruciating pain, despair and melancholy: could it be that all this would continue for another decade-and-a-half? Until 2036? And even beyond? During the past 100 years, this structure, like a hardened criminal, has changed its nicknames numerous times: Cheka-VChK-GPU-OGPU-NKVD-NKGB-MGB-KGB-AFB-MB-FSK-FSB. It changed its names as easily as the Brazilian anaconda changes its skin with seasonal changes, while remaining the same cunning, vile, unmerciful, gluttonous and lazy creature,” – wrote Suvorov.

He noted that the history of “punitive-terrorist structures” should have been written a long time ago and that attempts to do so were made but unsuccessfully.

“The book that was so desperately needed by the society has been written by the two brave researchers. Based on the danger factor, their work is comparable to the difficult and hazardous occupation of the hunters for crocodiles, giant boas or Komodo dragons. Let us not forget the fate of one of the authors of the book “Blowing Up Russia” Alexander Litvinenko, who was poisoned and died a painful death. On the one hand, this new book is a scientific monograph and a scrupulous analysis of the stages of development of the bloodthirsty monster, of his goals and methods for achieving them. On the other hand, the book is an exciting crime novel, which describes real events so awful and frightening that no writer could have done better even with the most daring of imaginations. This is because VChK-KGB-FSB is a nightmarish reality that outshines any fiction,” Suvorov emphasized.