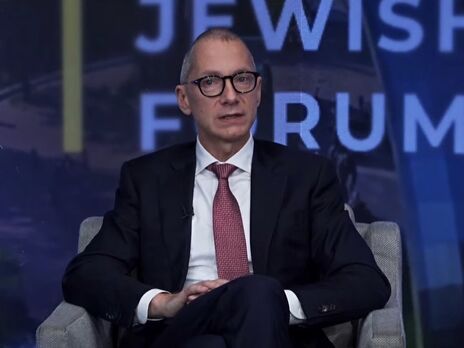 The trade turnover between Ukraine and Israel last year reached almost $800 million, which indicates the strengthening of economic ties between the countries. This has been stated by the President of the Jewish Confederation of Ukraine, Vice President of the World Jewish Congress Boris Lozhkin at the opening of the third Kyiv Jewish Forum.

“About 500,000 people from Ukraine live in Israel today. Our countries have agreed on a visa-free space during those thirty years, established a free trade zone, have become reliable partners with each other in many sectors, from agriculture and IT sphere to culture and medicine,” Lozhkin said.

The main reason for holding this forum is the 30th anniversary of the establishment of diplomatic relations between the State of Israel and Ukraine, which will be celebrated on December 26.

According to Lozhkin, a number of important events for the Jewish community have taken place in Ukraine over the past year. In autumn, Kyiv hosted events dedicated to the 80th anniversary of the Babyn Yar tragedy.

On the eve of this date, based on the materials of Yad Vashem, the Jewish Confederation of Ukraine, together with the Babyn Yar Holocaust Memorial Center and the Euro-Asian Jewish Congress, published the book “Righteous Among the Nations. Ukraine”. There are 2,674 stories of the Righteous Ukrainians who saved Jews during the Holocaust in it.

“Another important event for Ukrainian Jews was the adoption of the Law on Preventing and Countering Anti-Semitism by the Verkhovna Rada. This law lays down a working definition of anti-Semitism by the International Holocaust Remembrance Alliance (IHRA). The principled position of the parliamentarians and President of Ukraine Ukraine Volodymyr Zelensky played a huge role in the adoption of this important definition,” emphasized Lozhkin.

In 2021 it is already the third time that the Kyiv Jewish Forum is held. The forum takes place on December 15-16 as an online conference. As the President of the JCU Boris Lozhkin stated earlier, this year the KJF will bring together heads of state and representatives of governments and parliaments from many countries of the world. The KJF-2021 partners are Combat Antisemitism Movement, Center for Jewish Impact and Euro-Asian Jewish Congress.