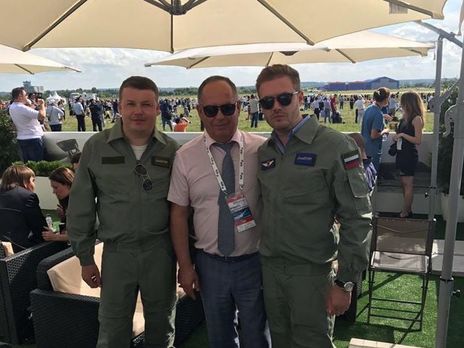 Popov (on the right) is fired after six day at office
Photo: Yuri Butusov / Facebook

Oleksii Popov, who was appointed as the director of aircraft manufacturer “Plant 410 CA” on January 9, is fired by agreement of the parties based on his resignation letter. Yuri Butusov, editor-in-chief at Censor.NET, reported that Popov failed SBU check-up because of a photo made in 2015 where he is seen wearing uniform of Russian military pilot.

“Decision was made based on the resignation letter with parties’ mutual agreement. Volodymyr Khomko, Deputy Director is appointed as acting Director General” – reads press release.

According to Ukroboronprom Popov worked on the position since January 9.

Yuri Butusov, editor-in-chief at Censor.NET, wrote in his Facebook that the reason for the dismissal was a photo of Popov in uniform of Russian military pilot.

“Popov failed SBU check-up because of that photo. I would like to express gratitude to Security Service of Ukraine for the professional job. I support the decision to dismiss director of an enterprise of state-owned defense concern. The photo, the sources inform, was taken at MAKS-2015 air show in August 2015 near Moscow. Oleksii Popov (on the right) had bought Russian pilot outfit. He stood next to his father.” – Butusov wrote.

His father, Viktor Popov, is Chairman of the Board at FED Company that specializes on development, production and service of aircraft, spacecraft and general mechanical engineering equipment.

In 2014, soon after annexation of Crimea, Russia commence military aggression in Eastern Ukraine. Armed confrontation lasts between Armed Forces of Ukraine on one side and Russian Armed Forces and the Russia-backed separatist forces who control parts of Donetsk and Luhansk regions, on the other side. Officially, Russia denies its military intervention in Ukraine despite multiple facts and evidences provided by Ukraine.