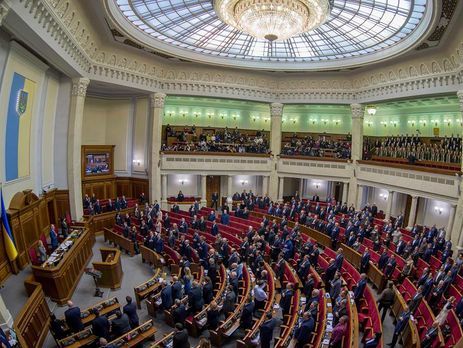 The Verkhovna Rada of the VIII convocation was elected on October 26, 2014
Photo: Верховна Рада України / Facebook

According to the Committee of Voters of Ukraine, there are 48 politicians in the Rada, that hasn’t created any law yet.

The Committee of the Voters of Ukraine defined the most effective and ineffective lawmakers of the Verkhovna Rada, the eights convocation of Ukraine’s parliament.

As the committee has explained, it measured the effectiveness of the lawmakers by the quantity of law projects, they submitted in four years of work in the current parliament and the number of bills supported by Rada.

Glib Zagoriy, Bloc of Petro Poroshenko faction member and co-owner of the “Pharmaceutical Firm Darnitsa” was acknowledged to be the most productive lawmaker with the 47 percent of his laws adopted.

“Over four years every second law project created by the politician has become a bill: 53 submitted, 25 – adopted,” the Committee of Voters said.

Among the parliament factions leaders the three most productive lawmakers were: Arthur Gerasimov from Bloc of Petro Poroshenko (32%), Maksym Burbak from People’s Front (26%) and Oleh Lyashnko, Radical Party leader(20%).

Independent parliamentarian Yevhen Murayev has become the most ineffective lawmaker.

“Over four years he submitted 160 law projects with none being adopted by the parliament,” the Committee of Voters said.

The Committee of Voters of Ukraine is a think tank, founded in 1994 as an independent civil organization with the “national status”. The Committee defines its mission as “the creation of the environment of equal rights and democracy for all people”.