A rabbit in front of a boa constrictor: why Trump satisfies all the Putin’s demands 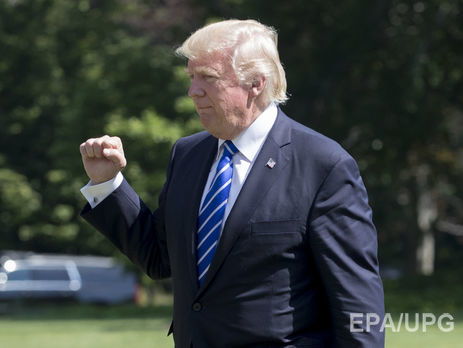 Felshtinsky: Trump praising Putin will stay in the memory of the generations to come as a symbol of the historic period of time indeed.
Photo: EPA

The President of the United States Donald Trump could not decline the request by the Russian President Vladimir Putin to meet with Russia’s Minister of Foreign Affairs Sergey Lavrov and Russia’s Ambassador to the United States Sergey Kisliak. Yuri Felshtinsky, a Russian-American historian, author of "Blowing up Russia" and "The Corporation: Russia and the KGB in the Age of President Putin" wrote about this in an exclusive material for GORDON, commenting on accusations against Trump who had allegedly leaked highly classified information to the Russians.

On November 2, 2016, I wrote an article titled “Trump as a Putin’s Agent And How It Threatens Humankind”. It was before the election. It seems to be water under the bridge now but nothing that has happened since then suggests that my claims regarding the current US President were baseless.

History, including modern history, is a puzzle that professional historians link into a coherent story piece-by-piece. And the whole picture is not going to make sense if they gave you pieces from some other puzzle. That is exactly the same way with Trump. All the information available regarding the current US President just falls into place under this general concept: Trump has been recruited by Putin.  I don’t know how or when. I don’t know the extent of Putin’s leverage. The usual leverage mechanisms are sex, money, or sex and money. In any event, while analyzing Trump’s behavior, it is impossible to get rid of the impression that Trump feels indebted to Putin for something and that he tries to pay him back every chance he gets. At the same time, the reverse does not seem to be true -- Putin does not seem to act like he owes anything to Trump, and thus Trump gets nothing in return.

During his Presidential campaign, as well as after the election, Trump never said anything negative about Putin. In fact, he speaks ill of everybody but Putin. Trump allowed into his inner circle General Michael Flynn (former adviser for the US President – GORDON) who was compromised and possibly even recruited by the Russians no later than December 2015 when Flynn flew to Moscow to attend the festivities on the occasion of the 10th anniversary of RT – a Russian propaganda TV channel, or may be just to meet his handlers from the FSB. 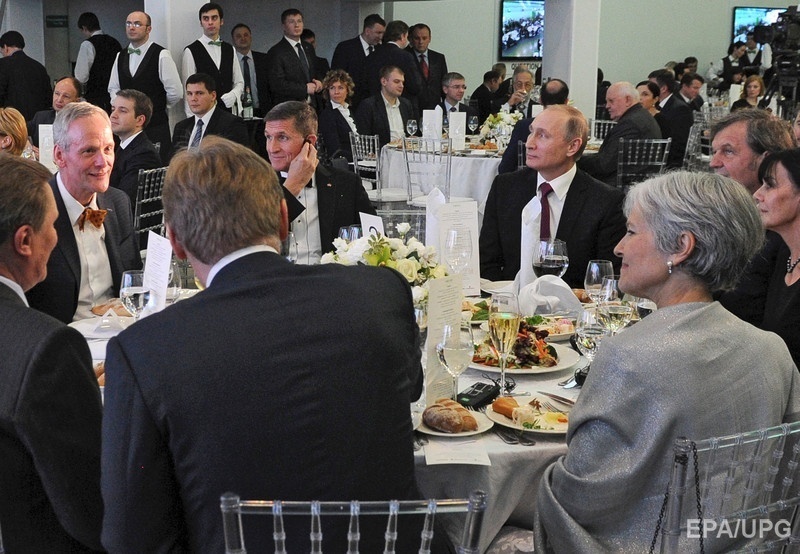 Everyone saw that famous photo of General Flynn seating next to Putin during that event in December 2015. But no one has ever wondered what all those people were watching so attentively. As a matter of fact, they were looking at the TV screen that showed Julian Assange, WikiLeaks founder, who had been invited but could not attend personally. Assange was permanently employed by RT and, as well as Flynn, had received payments from the Russian Government via RT.

There is another photo and it is appropriate to publish it today. It is of lower quality and therefore it is less known, but it speaks volumes on the subject at hand. On this photo, you can see General Flynn giving a standing ovation to Putin when such an ovation does not appear to have been necessary – at least judging by the fact that Putin’s Press Secretary Dmitry Peskov remained seated at the table.

Today we know that Flynn was bought for about $600,000 and he is currently under investigation in the US. But it is not about the fact that foolish, greedy or crooked Flynn was pocketing some dubious funds. It is about why Trump wanted just that kind of person – who was as badly compromised as General Flynn -- to be his National Security Adviser. And after suspicions of Flynn’s questionable activity and potential Russian connections surfaced, it was Trump who kept protecting the General instead of firing him on the spot. Indeed, it appears that to keep Flynn in the office, Trump put his own presidency at risk.

Trump nominated Flynn as National Security Adviser because it was one of Putin’s requirements. For the same reason Trump still defends and shields Flynn in every possible way. For the same reason Trump fired James Comey, Director of FBI who had refused to close an ongoing investigation of Flynn. Even before that, Trump had ignored numerous warnings about Flynn from Acting Attorney General Sally Yates; eventually, instead of firing Flynn, he fired Yates.

There are two possible motives for Trump to protect Flynn even when it jeopardizes his presidency.  The first one is if Trump has some obligations towards Putin concerning Flynn. The second one is if Flynn has something on Trump – e.g., something compromising that ties Trump to Russia. Given that Trump was aware of Flynn’s connection to the Russian Government before he nominated him as a National Security Adviser, there do not appear to be any other plausible explanations for Trump’s behavior.

The main problem is not Trump’s actions per se, but their context and underpinnings. It is possible that under different circumstances, it would be only natural to meet with Russia’s Minister of Foreign Affairs Sergey Lavrov and Russia’s Ambassador Sergey Kisliak. But to do this because of Putin’s request and to keep US media out while letting Russian media in, and to smile, shake hands, almost hug, -- this is something unheard-of in modern US history, especially after several months of public discussion of the Russian interference in US Presidential election. 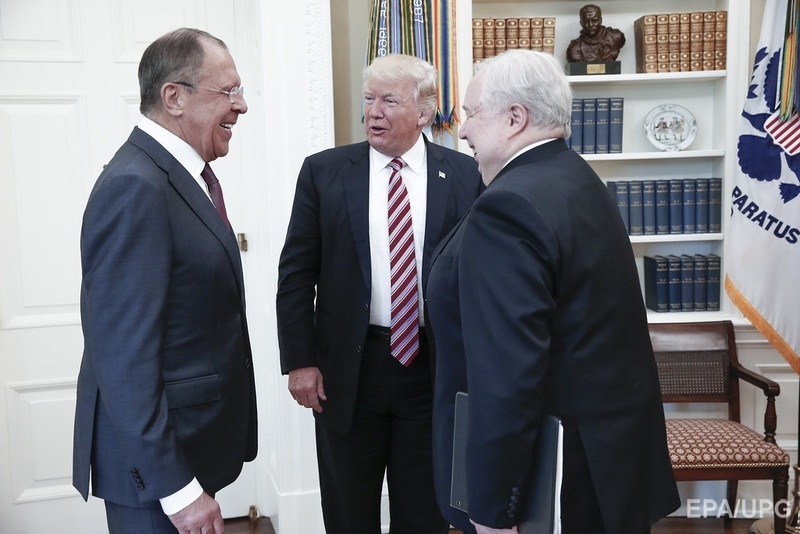 Lavrov, Trump and Kisliak at the meeting in the White House. Photo: ЕРА

It seems obvious that the classified information concerning terrorist threats should be shared with allies. But Russia is not a US ally. Moreover, there are serious reasons to suspect that Russia itself has been involved in a number of terrorist attacks, not mentioning Russian support of Syria and Iran.

President Trump resembles a rabbit in front of a boa constrictor. He seems paralyzed facing Russia’s ruler. He cannot resist. He is unable to decline Putin’s request that he meet with Lavrov and Kisliak, even though his status allows him to avoid such a meeting and such a handshake and such a smile in front of cameras. Trying to conceal the nature of his ties with Russia, he avoids US media. In short, Trump follows instructions from Putin just like any agent does with his handler.

Here is a story unrelated to these days. But it still can tell us a lot about KGB’s methods of recruiting a celebrity. Yevgeny Yevtushenko, well-known Soviet poet, recently deceased in the US, had a prolonged history of cooperation with KGB. His KGB’s handler’s name was General Yevgeny Petrovich Pitovranov. He was as talented as the poet himself, only in a different line of work. Just like many other KGB officers (Yuri Andropov, for example, wrote poetry), Pitovranov had his weakness: he collected books autographed by recruited poets and writers. Among others, Yevtushenko gave him a book with an inscription “What is more frightful than to take a foe for a friend is to hurriedly take a friend for a foe. From Yevtushenko to Pitovranov.” Both are dead now. But the book and the inscription remain.

I do not know for how long Trump will remain the US President. But I am sure Trump praising Putin, and Trump smiling with Lavrov and Kisliak after he has fired the Director of FBI the day before to stop the Russian investigation -- this Trump will stay in the memory of the generations to come as a symbol of the historic period of time indeed.