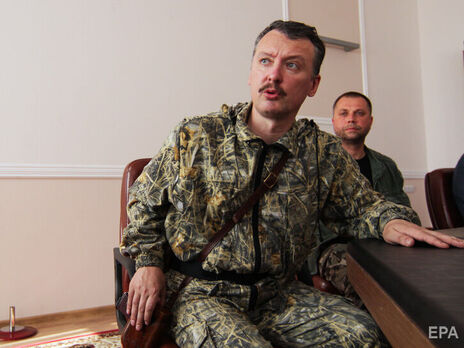 The Defense Ministry's GUR is not sorry to pay $100,000 to anyone who captures Girkin, a valued client for The Hague
Photo: EPA

Ukrainian intelligence has information about the arrival of former "DPR" militant leader and terrorist Igor Girkin (Strelkov) on the temporarily occupied territory of Ukraine. Major-General Kyrylo Budanov, the head of the Main Intelligence Directorate of the Ukrainian Defence Ministry, said this in an interview with the Orestokratiya project published by the Obozrevatel website on 18 October.

"One of his locations is known, he has already arrived in the occupied Ukrainian territory, let's wait for the rest. There are chances", – Budanov said.

He did not specify whether the information about the former leader of the "DPR's" militants being in Kherson Region was true or not.

The intelligence officer also commented on the $100,000 reward established by the Defence Ministry's State Control Department for capturing and handing over Girkin to a Ukrainian captive.

"It is, in fact, not that expensive for such an individual. He is an important carrier of information, primarily for international criminal trials. In fact, as they say, he is a client of The Hague. He won't even be "ours". The General Intelligence Directorate(also known as HUR. – GORDON) will find that kind of money to help our colleagues in The Hague", – Budanov explained, laughing.

He added that he had already received several messages of interest since the announcement of the reward for the Russian terrorist.

"Apart from all the rubbish being sent to that phone number [listed in the ad], a few people have turned up with absolutely real offers, and that was interesting enough for me. Let's see", – the head of the Ukrainian Ministry of Defence's HUR suggested.

Following reports by Russian propagandists that Girkin was resuming his involvement in Russia's war against Ukraine, posts appeared on Ukrainian social networks on 15 October announcing a reward for taking him prisoner. The Defense Ministry's HUR promised $100,000 for Girkin – the most of any of the offers.

Girkin was born in 1970 in Moscow. He took part in military conflicts in Transnistria and Bosnia, as well as two Chechen campaigns, and is a keen military reconstructor. During the Chechen war, according to Russian human rights activists, he kidnapped and may have been involved in the killing of local residents.

According to Snob magazine, Girkin was a member of the Russian Federal Security Service from 1996 to 2013. Prior to 2014, according to the Security Service of Ukraine (SBU), Girkin had been to Ukraine several times. The last time he crossed the Ukrainian border legally was on 26 February 2014, flying to Simferopol. During Russia's annexation of Crimea, he was an advisor of the head of the occupation administration, Sergey Aksyonov.

In April 2014, Girkin moved to Donbas. Under his leadership, militants seized Sloviansk in Donetsk Region on 12 April. On 5 July, militants led by Girkin left the city and moved to Donetsk. From May to August 2014, Girkin called himself the "defence minister of the DPR". In early August, it became known that he had resigned and returned to Russia.

Girkin is wanted in Ukraine. He is suspected under a number of articles of the Ukrainian Criminal Code, including Article 258-3 (establishment of a terrorist group or terrorist organization), Article 294 (mass riots), Article 258 (terrorist act), and Article 341 (seizure of state or public buildings or structures). He is one of the four defendants in the case of the crash of the Malaysian Boeing 777 over Donbas on 17 July 2014. The trial is taking place in the Netherlands and Girkin has refused to participate. He is under EU and US sanctions.