Putin declares the start of a "special military operation" in Ukraine 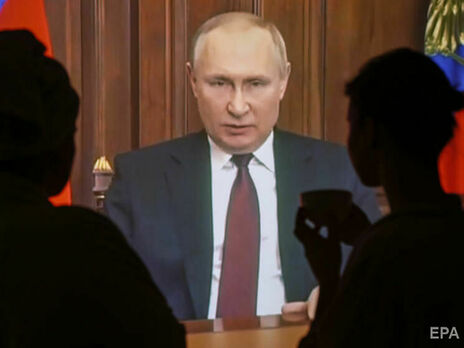 Putin released an overnight video message about the beginning of aggression against Ukraine
Photo: EPA

Russian President Vladimir Putin announced that he had decided to conduct a "special military operation" in Ukraine in connection with the situation in Donbas. The speech was broadcast around 4.50 Kyiv time by the Russia 24 television channel.

"The decision about a special military operation has been made. We will seek to demilitarize and denazify Ukraine," Putin said.

The Russian president said that his plans "do not include the occupation of Ukrainian territories" and they "are not going to impose anything or anyone by force."

Putin's address was broadcast as the UN Security Council convened for an emergency meeting. It was initiated by Ukraine in connection with the appeal of the leaders of the illegal armed groups "DPR" and "LPR" Denis Pushilin and Leonid Pasechnik to Putin. They asked Russia to help "in repulsion of aggression" allegedly from Ukraine.

On Feb. 23, according to U.S. media, including Newsweek and CNN, the United States warned Ukrainian authorities that Russia was preparing for a full-scale invasion in Ukraine within the next 48 hours. A Pentagon source told reporters that the Russian operation would be complex. It will likely begin with a cyber attack, followed by a ground invasion, which will likely take place overnight. According to Newsweek's interlocutors, the operation will not be limited to a ground invasion but will include air strikes and firing of winged missiles.

The publication pointed out that shortly after Newsweek learned about the US forecasts, some government websites in Ukraine stopped working. The State Service for Special Communications and Information Protection of Ukraine confirmed that there had been a cyberattack against Ukraine on February 23 (at the moment, some websites, such as those of the Cabinet of Ministers and the Security Service of Ukraine, are still inaccessible).

At night, Ukrainian President Volodymyr Zelensky recorded a video address to Russians, in which he said that there were about 200,000 Russian soldiers along the Ukrainian border. He stressed that Ukraine does not want war and is ready for negotiations, but will defend itself if attacked. "If they try to take away our country, our freedom, our lives, the lives of our children – we will defend ourselves. Not attack – defend ourselves. When you attack, you will see our faces. Not our backs. Our faces," said the head of state.

In 2014, Russia occupied the Ukrainian peninsula of Crimea and began armed aggression in eastern Ukraine. Fighting is taking place between the Ukrainian Armed Forces on one side and the Russian army and Russian-backed militants who control parts of Donetsk and Luhansk regions on the other. Officially, the Russian Federation does not recognize its invasion of Ukraine, despite the facts and evidence presented by Ukraine.

Against the background of the Russian military buildup on the border, there has been a sharp escalation in Donbas since February 17, killing Ukrainian servicemen and civilians. On February 21, Russia declared the recognition of the illegal armed groups "DPR" and "LPR," which operate in the east of Ukraine, as "independent republics".

Following this decision, the US, Canada, the UK, Japan, and the EU imposed sanctions against Russia. Western countries stressed that in case of a full-scale invasion of Ukraine, these restrictions would be significantly strengthened.

Ukraine announced a call for reservists and imposed a state of emergency.